I have couple of plant-based recipe books at home, but I usually just jump online and see which of the internet’s billions of options suits me today, or check a bunch of vegan cookbooks out of Central library and – eventually, after many a fine has been accrued – photocopy a few recipes to hold on to add to my collection.

Even though the internet is an amazing source of recipe inspiration and how-tos, there is something about leafing through the pages of  your own cookbooks that can be more stimulating, more fun somehow. Juicier.

Last week I decided that it is in the interests of the ongoing awesomeness of my kitchen that I get a few more good, staple vegan cookbooks up on the shelf. The result is four books on the way and I am so excited, especially about this first one:

Here is what Isa and Terry have to say about Veganomicon:

“Over 250 of our favoritest vegan recipes with absolutely no “soy cheese” this or “store bought veggie burgers” that. Many of the recipes were written for every day meals, in hopes that you won’t even need to look at the recipe after making it a few times. The kind of chow you can whip up any night of the week with your pantry staples and some seasonal produce. But you can also trust it when you’re looking for an extravagant spread to impress, say, your inlaws, or the mayor of your town when she stops by.” (read more here)

FINALLY. I have wanted to get my hands on a copy of this for so, so long, I can’t wait to dive in! Down to earth, fuss-free recipes are just what I need and these two women know their stuff inside out and back through again. 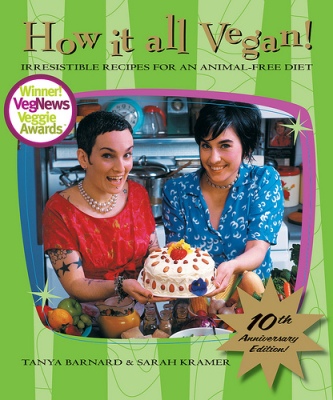 How It All Vegan by Sarah Kramer and Tanya Barnard*

This book has cost me so much in overdue fines at the library that it’s about damn time I got my own copy. I love How It All Vegan; it’s the cookbook your Grandma would have written if she was a vegan chef in the 90s.

This book makes a point of avoiding ‘meat substitutes’ such as tofu and tempeh, and hones in on fresh vegetables instead, with a focus on South Asian flavours. This was an especially awesome find because, aside from the odd stir fry or Thai red curry, I am a newbie when it comes to cooking Asian-influenced food. Kitchen experiments, ahoy!

The Icing On The Quake: Easy, Delectable Vegan Baking by Christchurch volunteers

This is a cookbook that is already close to my heart, because the proceeds go towards rebuilding the Christchurch Vegetarian Centre, the home and resources of which were destroyed in the nasty February 2011 earthquake. All of the recipes were donated by local vegan and vegetarian types and there are some ‘kiwi favourites’ in there that I need to try out like rightthisminute.

This book is definitely nothing to do with wholefoods and everything to do with sugar-filled treats, but if you are making a point of eating great, there is gonna be minimal harm in a bite or two of some dairy-free baking.

All of  these should be arriving over the coming week! I’ll be giving you guys the low down on all of the books, and reviewing my favourite recipes too.

* NZers can get a copy of How It All Vegan from Katipo Books for $20 + $5.50 shipping, which is a sweet ass deal. They also sell Garden of Vegan (the follow-up to How It All Vegan) and Vegan With A Vengeance for $20 a piece as well. Katipo is where I sourced my copy; they’re cool cats.